Among the common causes of car accidents are reckless driving and speeding. Texas law defines reckless driving as driving a vehicle “in willful or wanton disregard for the safety of persons or property.” The statute applies not only to driving on highways and other public places, but also to driving in a parking area or access way for a business.

The Texas Transportation Code forbids motorists from driving at a speed greater than what is “reasonable and prudent under the circumstances.” Motorists are also required to adjust their speed when appropriate due to road hazards.

If a reckless driver caused an accident that injured you, contact our Austin car accident lawyers at 800-615-5370 or send us an email.

By definition, anything that amounts to reckless driving also amounts to negligent behavior. In order to avoid being negligent, drivers must take reasonable care to avoid injuring anyone or harming any property. A driver whose negligence causes a car wreck is legally liable for the damage that results.

Negligent drivers can be compelled to repay the costs of medical treatment for persons injured in accidents due to negligence. They can also be accountable for wages lost because of the injuries. Moreover, a payment for pain and suffering can also be assessed.

Texas law specifies that violating speed limits constitutes driving at a speed greater than what is reasonable and prudent. Although drivers may cruise by at higher speeds, the maximum speed limit anywhere in Texas is 70 mph, and the limit is much lower on most roads. Drunk Driving Accidents he speed limit is especially important on dangerous roads.

The 70-mph limit applies only to daytime travel on numbered highways and on roadways that are labeled “Farm Road” or “Ranch Road” outside urban districts. On these same roads, the nighttime speed limit is 60 mph.

Even if it is possible to speed without getting caught and ticketed, drivers who are oblivious to speed limits and get into accidents while speeding are opening themselves up to lawsuits. Causing an accident that injures someone while breaking the law is generally regarded as negligence.

Speed Can Be Deadly

Speeding is a factor in 30 percent of all fatal motor vehicle accidents in the United States, according to the National Highway Traffic Safety Administration. Almost 10,000 people died in speeding-related crashes in 2011. 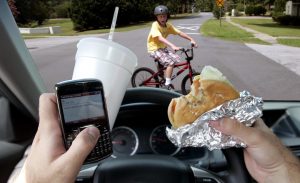 Penalties under the law for reckless driving are mild, compared to what a reckless driver could have to pay in a personal injury lawsuit. Fines are $200 or less, and incarceration in county jail is for no more than 30 days. Speed limit violations incur low penalties as well.

Compensating an innocent car accident victim, though, could easily require paying tens of thousands of dollars, or more. A person injured due to negligence is entitled to payment for medical expenses, lost wages and pain and suffering.